Laparoscopic surgery is a very popular diagnostic procedure that allows the doctor to see the condition of the womb and the ovaries as well as the passability of the uterine tubes. This procedure is used to confirm such diagnoses as endometriosis, myoma, extrauterine pregnancy, ovarian cyst and adhesions in fallopian tubes. The popularity of laparoscopy can be easily explained by the fact that it is much more informative than a scan or hysteroscopy. It lets the clinician see all the organs in the abdomen with the help of a special telescopic camera (laparoscope).

During the process of laparoscopic surgery, the doctor makes 2 small incisions in the abdominal cavity. They insert a special camera with lights (laparoscope) in one hole and the tools they need in the other hole. With such an instrument the doctors can immediately cauterize the focus of the endometriosis when they discover it. They can also cut the adhesions in the fallopian tubes, remove myomas and cysts and complete other necessary surgical procedures.

To understand how it happens and what the doctor can see during laparoscopy, look at this picture: 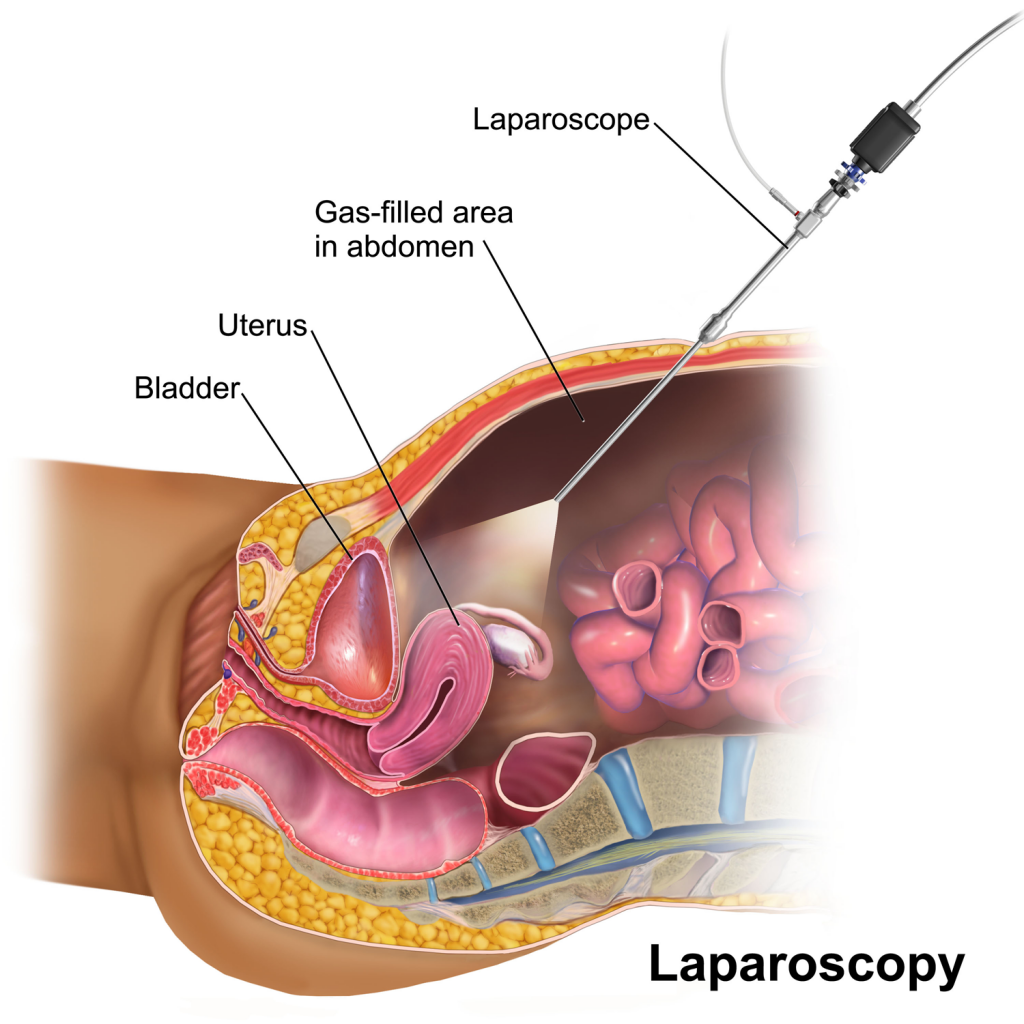 Here you can see a shot from diagnostic laparoscopy as the doctor can see it. The round lump in the middle is the uterus. Above it there is the abdominal wall, under the uterus is the spine of the patient. The cilium to the right and the left of them is the fallopian tubes. The whitish areas underneath are the ovaries. The left ovary has a small dark stain which is the focus of endometriosis.

Discharge (bleeding). Right after the laparoscopy you may have heavy discharge and even bleeding very similar to the menstrual period. Such bleeding can last up to 3 weeks but usually it goes in a week or turns into a regular period. You should seek your doctor’s advice if you have bad pain or heavy bleeding.

Period (missed period). Laparoscopy is usually done on the 7th – 10th day of the cycle before ovulation. If there are no complications, you are unlikely to have a missed period after laparoscopy. The period may move a couple of days but the cycle doesn’t break as a whole.

Scars (stitches?). You will have two small scars after this operation. One is near the belly button and the other one is on the top edge of the pubis. These scars will almost completely disappear with time. Stitches are not used after laparoscopy.

Sex. Even if you do not have discharge or it is weak and you are feeling good, the doctors recommend waiting until the next cycle in order not to get damaged tissues in the abdominal cavity infected. However, there is no general rule – if you feel you are ready for sex – why not have it?

Ovulation. If you did not have problems with ovulation before laparoscopy, you should not have them after this diagnostic operation. That is why you should expect to have it as usual. Remember that having 1-2 anovulatory cycles per year is a norm and do not worry if the following cycle after laparoscopy turns out to be anovulatory.

The most important question is “When can I get pregnant after laparoscopy?” Getting pregnant is why we have to go through this procedure. Unfortunately it is difficult to answer this question. It all depends on the diagnosis which has been made during laparoscopy as well as whether the appropriate surgical procedure has been carried out immediately. A less invasive type of the operation does not give the doctor total control as during major surgery. The doctor has to operate inside the body with the help of tools without direct contact. Doctors can only control the operation with the help of the camera. For example your chances to get pregnant in the next cycle increase if the laparoscopy diagnoses endometriosis and cures it. If adhesiotomy has been carried out or impassability of the uterine tubes cured, your chances to conceive in the next cycle increase. The professionalism of the doctor as well as individual characteristics of your body influence the possibility to get pregnant.

We hope you will get pregnant soon!